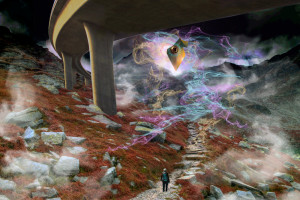 It’d all started when she found the fractal-covered piece of glass while hiking. Now she was following a trail made of hundreds of little fractal shards through an alien planet with a roaring dark-bright sky.

The geometric shape she’d seen earlier still hovered over the horizon, sending out neon tendrils of energy that writhed and sang soft whalesong lullabies. She’d been following the trail for hours, and the shape still frightened her. The churning gears inlaid into its surface reminded the girl of a giant eye, watching her as she wandered through this Mordor for aliens.

The mist hugged her skin, wormed its way under her jacket, and obscured the giant overpass until it was almost directly overhead. Even more than the floating geometry, the concrete was unnerving. It seemed so out-of-place, among the red lichen and the sky that wouldn’t stop rumbling.

She could see a valley ahead, and in the distance guitars and organ pipes were playing, loud and sounding like a metal concert. All around the girl, the colored lights throbbed.

‘You coming?’ they whispered. They sounded like preschoolers. ‘It’s only a little farther’.

The girl shrugged. She was completely lost and had nothing better to do. As she approached the overpass, she could hear it humming. Maybe it was like the living roads at the base of the mountain, patrolled by creatures covered in silk-scarf deedlybobs. And maybe she was dreaming. It was so hard to tell.

Organ pipe music beckoned. She nudged forward and kept following the lights and the creepy Sauron triangle monolith, her feet crunching against glass.

Already she could see more fractals.